The HANDS Team brings on many events and HANDS Projects in order to raise money for those in need. Below is a list of projects the HANDS Team has currently undertaken, with faith in changing the world for the better.

Below is how the #HandsTeam is making a difference:

5k Run for the PAWS

HANDS Team held our 1st Annual 5k Run for the Paws on June 2nd, 2012. We linked up with the Stark County Humane Society in order to raise money to feed all the needy animals that the Humane Society takes in annually. We had 88 runners for our 1st ever run, and raised $1300 that was spent on food and cleaning products for the Humane Society to help care for homeless animals. We are planning to keep doing the event year after year and growing it to a national level. Please take a couple minutes to watch our tribute video.

Through Jessica Chapman, HANDS Team was notified of a little 11 year old girl, who is fighting the battle for her life against a brain tumor. HANDS Team quickly organized a fund raiser at the University of Akron and online and was able to raise an outstanding $1200 to help aid Brittany and her family in her fight against her tumor. Watch the video below as we present the family with their relief check.

While the HANDS Team was at Chapel Hill Mall in Akron, Ohio selling Unity Bands to raise money to send care packages to soldiers, we by chance met BJ Elliot and his family who were also vendors at the Chapel Hill Marketplace during the 2011 holiday season. We soon learned of their families hardships caused by BJ’s colon cancer. We then decided to give a large portion of the proceeds raised at the mall to BJ Elliot and his family.

When approached by a family friend of James Norris; the HANDS Team answered the call. A family and a Army veteran, James Norris who had been stricken with Melanoma Skin Cancer. With 4 days and the students of the University of Akron backing us, the HANDS Team was dedicated to raise over $1000 to help take the families focus off of money and on family. In our 4 day tenure at the University of Akron student union, the HANDS Team and the students raised a total of $1406 for the family. Our hearts are with your family in this time of need, and we hope this small contribution helps.

The HANDS Team came together with AM Clothing Co. to help raise money for a local woman with Breast Cancer (Kelli Hughes). Kwadwo Bediako, of AM Clothing, sold Breast Cancer Awareness Shirts to help raise $500 for Kelli’s fight against breast cancer. The HANDS Team also matched $500 by selling Breast Cancer Awareness Unity Bands. Combining our forces we were able to raise a total of $1000 for Kelli Hughes to help pay her chemotherapy bills. With this contribution we hope to make Kelli’s fight against breast cancer a little easier. 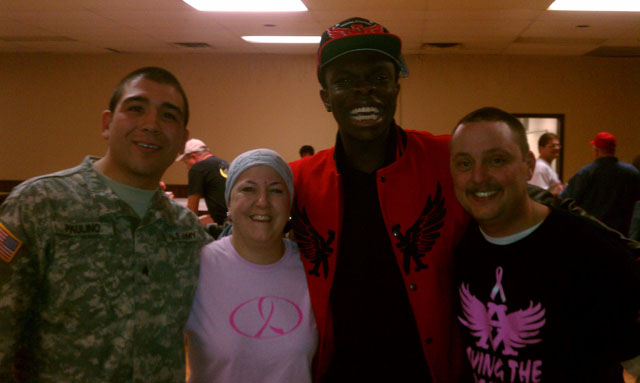 The HANDS Team is consistently raising money to buy goods and send care packages to deployed soldiers overseas. Thus far, HANDS has sent over 50 care packages to our dedicated soldiers. The majority of funds raised for our soldiers care packages, are raised by selling Unity Bands at events and online in our eShop.

The HANDS Team collaborating with the North Canton USO to send care packages to our soldiers overseas.


Changing the World Everyday, in Every-way

Not only does HANDS run these larger projects, but the HANDS Team members strive to help people every day, in every way. Whether that means pushing a broke down car to a gas station, or helping an old lady cross the street, our HANDS Team members are there. Leading the way for positive change the HANDS Team is dedicated to being the positive influence we want to see in our communities.